The Introductory to Participatory Video for Social Action course, was based on Real Time‘s participatory video approach, which has been used extensively for more than 30 years in non-formal educational settings. Real Time’s approach uses group-based games and exercises to promote participatory learning and collaborative production methodologies.Participatory video is a key tool for individual and group growth, and it can be a powerful aid in the development and realisation of people’s abilities and potential. Moreover, as it’s a group-based activity, it uses practical approaches to explore and express participants’ needs, stories and values. Additionally, participatory video can be used
to develop participants confidence and self-esteem, by encouraging them to express themselves creatively, develop critical awareness and by providing a means for them to communicate with others. 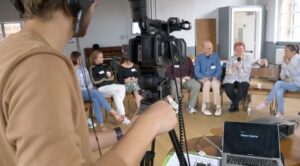 Hence, this course explored alternative and innovative approaches to the more traditional industrial video production models. As a result, this provided participants with new methodologies to explore how video can be used to inspire young people to become more actively involved in democratic life. The training explored various strategies indented to inspire, engage, and involve young people in civil life, by using participatory digital media to empower them to shape their role in the decision- making processes. This provided participants with the maximum opportunities to develop their film making and group work skills. The content of the exercises and short video recordings were structured around the issues that young people face with reference to European democratic issues. By including innovative and interactive non-formal educational approaches, participants learned how to use video to engage young people with European values and democracy. Participants earned how to use various forms of video, how to plan, record edit and distribute their videos and how to work effectively with international groups. Real Time provided all the video equipment required for this training. This included a variety of cameras from camcorders to DSLR’s, participatory workshop equipment, iPads, and computers with editing software. The training took place at 2 venues in Reading: South Street Arts Centre and The Museum of English Rural Life (MERL). The museum offered an enriching experience for the participants and provided an outside space to film. Likewise, participants could explore the MERL’s extensive collections to gain prompts and inspiration for their stories.

Day 1
On day 1, participants were initially welcomed to the course and introduced to one another. Subsequently, Real Time introduced the course participants to the fundamental principles of participatory video and various other methodologies. By the end of the session, all participants understood the objectives and content of the training.
The exercises that were demonstrated on the first day, focused on engagement with groups and individuals and the types of exercises typically used when working with young people. This included a video-based name game and various question game which were followed by a discussion with participants on what they wanted to achieve from the course. This provided a way to ensure that the participants understood the aims of the course, but also provided an opportunity for any issues or concerns to be addressed.
A world café game was then used to interrogate the different ways that video can be used to engage in social action and promote democratic values. Additionally, the phases of a participatory project were introduced and linked to each training days specific outcome. The edit game exercise was used to introduce the concept of in-camera editing.
The participants were then split into 3 groups, with each group being given a video kit comprising of a camera, batteries and charger, tripod, directional microphone, boom pole and headphones. Each participant practiced setting up the camera and making sure they were familiar with how it worked. The participatory ground rules were explained, particularly so that everyone had to take turns covering all the roles (camera, director, sound monitoring, boom operator, interviewer etc.).
The groups were comprised of people from different countries to maximise the intercultural experience. The final exercise of the day looked at composition and creating narrative sequences. Each group recorded an in-camera edited 5 shot sequence on a particular topic, such as: food, likes dislikes etc. 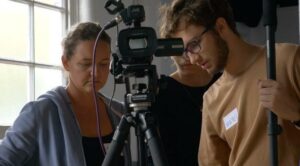 Day 2
Day 2 took place at The Museum of English Rural Life, and the focus for the day was to use video processes to explore your environment (locality) and develop agendas. Firstly, the group were given a short introduction to the work of the museum and were then tasked with finding and object of particular interest (related to the courses theme). Each participant was then required to show a picture of their object and explain why they chose it. Through this exercise, the group started a discussion on how to use prompts (objects, pictures, drawing, memories) as a starting point for the video process.
Afterwards, participants were introduced to the principals of storyboarding and filming interviews. Four Post-Graduate students from Henley Business School, who are currently working with Real Time offered their time to be interview subjects. Each group introduced themselves to one of the students, planned questions to ask them and then recorded an interview outside. Furthermore, the concept of a b-roll camera was introduced to each group, and they were given an iPad to film behind the scenes footage.

At the end of the day, the production process was introduced to the groups and the task of making a video about the themes of 2VIP was set up. Each group was required to write a brief and storyboard, to ensure they were ready to film and edit the next day. Groups also had to clarify logistics, locations and allocate appropriate time for each of the locations and tasks. 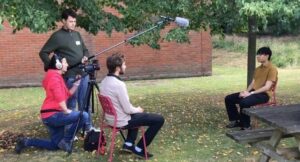 In the evening a meal took place at a nearby restaurant for the participants to socialise. 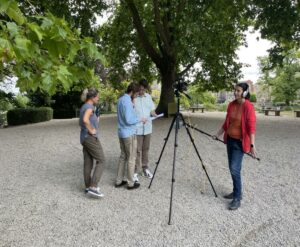 Day 3 was based at the Real Time office at South Street Arts Centre. The individual groups collected their equipment and undertook the productions around the local area, using camera equipment and iPads to film behind the scenes footage. Each group was supported by one colleague from Real Time. After the filming was complete, each group returned to South Street Arts Centre and were supported in editing the films using Adobe Premier Pro on Real Time’s computers. The groups were also able to edit short behind the scenes videos using the iPads provided.

Once all the films were completed, they were screened to the whole group. 6 filmed
were created in total, which can be found below:

Behind the scenes footage

Behind the scenes footage

Day 4
Certificates of attendance were presented to each participant, and each group discussed the films produced. Participants also had the opportunity to contribute to a  question-and-answer session that explored some of the issues raised during the
course. Lastly, there was an opportunity to discuss in country groups specific technical and content issues on using the processes. This included how the methodologies could be used with various participant groups and the difficulty of using phones in participatory processes due to the power and control passively exerted by the owner.

The group was slightly smaller than anticipated, due to logistical problems and organisations dealing with the aftereffects of covid on their management. The participants fully engaged with the process and the exercises. This ensured that the course was able to cover all the intended aims. The use of iPads as behind the scenes cameras worked particularly well, as they provided not only a record of the activities but also a way for the less experienced editors in the group to have achance to learn new skills. 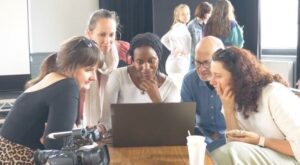 Having students from Henley Business Schools participate and agree to be interviewed worked well, as this provided a much more real-world experience for the participants compared to practicing on each other. During this course, there was a lot of content to cover in a relatively short space of time. Video production processes is a massive filed. Concentrating on participatory video for the first 2 days and collaborative production for the last 2 days, provided an appropriate structure for the course. As participants were not overwhelmed with too much technical and creative content at once. Moreover, the short games that were introduced helped participants to understand various aspects of the approach in both technical and creative ways. Also, having 3 small groups working on the productions was successful as all the groups were able to plan and complete their tasks successfully in the allocated time. 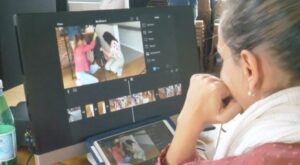